A ready solution to the challenge of texturising cultured meat 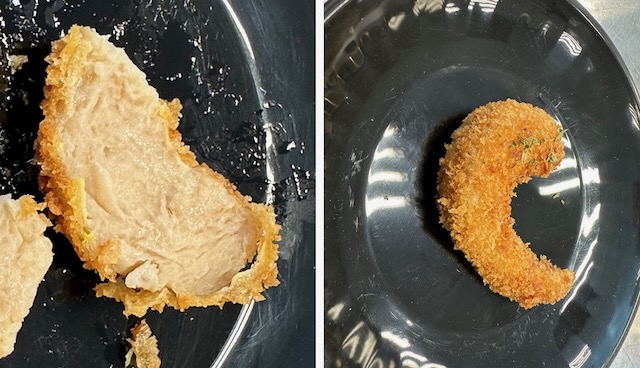 Despite the millions that governments, companies and philanthropists have invested in cultured meat, the take-off of meat formed in bioreactors has not been realised. This is due to the mushy mouthfeel of the products that companies were able to develop so far. “The solution to this challenge is already available,” says Wouter de Heij, CEO of TOP bv. “Our company has already developed multiple solutions.”

Dozens of companies worldwide, either independent or in collaboration with research institutes and universities, are working on the development of synthetic meat made of muscle cells in bioreactors. The ideas of the Dutch scientist and innovator Willem van Eelen (1923-2015), who managed to license multiple patents during the 90’s of the previous century, were a prominent source of inspiration for this development.

Van Eelen’s patents were about a technology for ‘in-vitro cultivation of animal muscle cells that are able to form three-dimensional muscle tissue. Van Eelen, who experienced famine in the concentration camps during the Second World War and was opposed to animal suffering, has not been able to live through the rapid developments in recent years. In the Netherlands the group of Mark Post, a professor from Maastricht, has since 2011 had a prominent role in these developments.

“Singapore is an important economic region for this industry,” says De Heij. “In the EU cultured meat is still a novelty product that is not allowed onto the market, but in 2020 Singapore has approved cultured meat for marketing. This has made Singapore very favourable for cultured meat developers.” The South-Korean company CellMeat is one of the companies that has put bioreactor-cultured prawns onto the market.

“The flavour of these products is excellent, but this is not the case for the overall mouthfeel,” says De Heij. “Cell cultivation is not a problem anymore, but the integration of cells into a three-dimensional tissue structure as was mentioned in Van Eelen’s patents is apparently still out of reach.”

It might even take billions more to get to the point of creating complete tissues in bioreactors. For those companies not willing to wait for this TOP has already developed interesting new technologies in recent years.

“We have developed processes for vegetarian- and vegan products that combine new machine technology, pre-fibered vegetal proteins and vegan-binder systems to create fibre structures that are nearly identical to the texture of organic muscle meat.” De Heij explains. “These processes can be modified in such a way that we can integrate cultured cells into these vegetal fibre structures.” Such hybrid products could include 10-20% cultured cells and be completed with vegetal material.

Another possibility is the use a new generation of the most innovative food product 3D-printers. “We expect to be able to make salmon fillet and steaks with this technology,” says De Heij. The concept of printing steaks or salmon might not catch on with devout vegetarians and vegans, but perhaps it might catch on with the larger segment of ‘flextarians’, who do not refrain from eating meat altogether but do not wish to eat meat every day. Market researchers found that 30-40% of all consumers are to be found in this segment.

Are you interested in “Solutions for the challenge of texturising cultured meat” or do you want to know more? Feel free to contact us, follow us on social media or sign up for our newsletter.