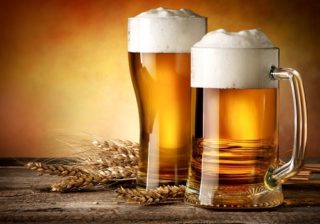 After a little peek into his personal background and motivations (see part 1), it’s time for Maurice to tell us a bit more about the current beer project.

Artisanal beer is emerging, there are 500 breweries in The Netherlands, often with custom made machinery. Many starting brewers lack knowledge of food; they’ve had the legally bound half day course in social hygiene, but no background knowledge in food preparation and preservation. Installations offered are not up to the standard of industrial equipment for food processing. The hygienic design and cleanability are not up to par. The mandatory HACCP plan and certificate say little about the actual knowledge of the brewers.
Many start-up breweries have raised € 100 to 200,000 by crowdfunding. After that decisions about the purchase of equipment must be made in a short time, without the knowledge necessary for medium-sized and starting breweries.

I see possibilities for TOP in improving the equipment and risk reduction of contamination in beer. Not only build the machines, but the entire process: advice in purchasing the equipment, cleaning, upscaling, recipes, hygiene, labelling, laws and regulations. Through the formation of BOX, even financing of start-up capital is now possible.

Again it is a broad project. Mechanical Engineers and Food Technologists of the Process Design and Food Design team are involved in the hygienic design and the recipe improvement.

Over the past few months we have been visiting several breweries. The first couple of years great losses are suffered due to spoiled beer, often caused by badly designed and hard to clean equipment, resulting in post-contamination of the beer. Often there are only 2 actual days of brewing per week; the rest of the week is used for bottling and cleaning.

A lot can be gained by automation, for example bottling performed not by 2 but only 1 man. Some small breweries go bankrupt, others get into trouble, and again others have a problem by using too large amounts of detergents. Fortunately there is enthusiasm to find solutions.

What to do: invest!

Some of the equipment I encountered was bought for € 10,000, but a well-designed version would cost between € 20 to 30,000. These initial higher costs are paid back in the following years, for example by less loss caused by spoilage, less time needed for cleaning and less use of detergents. So this investment is very much worthwhile. Good advice in the baseline year is crucial. TOP can, also for existing breweries, perform a Quick Scan which results in a list of points of improvement.

For consumers it is also an interesting project. The results will be: improved, tastier beer of a constant quality. A triple of one brand, bought one month later can suddenly taste different. We can help prevent that from happening.

Use a pump suited only for water: sugars from the beer remain in the pump, after which the bacteria have plenty of time to form a biofilm. These bacteria can completely spoil the next brew. After each brew important components like pumps need to be cleaned properly. A pump meant for water is not designed for cleanability; that’s why food grade pumps have a special design.

Next to that at a lot of brewers use fittings, sealed with Teflon tape or hemp. These are not fit for a professional machine meant for food processing.

Another example of what not to do: bottle machines with hoses meant for compressed air instead of food grade hoses, without CE, and without protection in the stopper press. 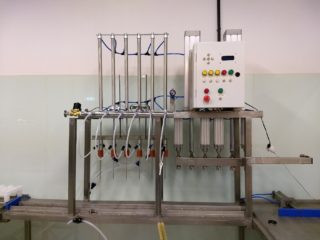 Bottle machine with wrong hoses and without safety in stopper press

Clearly Maurice is very enthusiastic about this project. “Potential and market opportunities!” he exclaims.

Are you a starting or medium brewery and do you want to improve your beer? Ask for a Quick Scan by TOP bv. Cheers!