After VWO (pre-university education) I wanted to go to university. I’ve looked at TU Delft. Also TU Aken, where mechanical engineers are trained in automotive technique, amongst others to design Formula 1 cars. Fabulous, of course, but too massive for me: there were about 1000 freshmen.
I visited WUR’s open day: Wageningen as a city appealed to me, as well as the many practical aspects of the study Food Technology. A lot of lab work, tests, machines. Of all the educations I considered, this one was most suited for my own practical mindset. I’ve completed the study within six years. It included an internship of half a year at RIVO (now Imaris), and half a year at Slovakia’s largest brewery, Zlaty Bazant – owned by Heineken. (Now we’re talking!)  [see pictures Slovakia 2001] 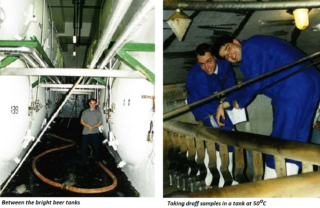 After university I got to work at ATO, with CEO Bert Tournois (co-founder of TOP bv), and in the same group as Wouter de Heij (CEO of TOP bv) performed research in a special project; a study into extermination kinetics of bacterial spores in PATS (Pressure Assisted Thermal Sterilization). Among others I worked with Jannie van Beek (food technologist at TOP bv) at PEF tests, cold plasma, new techniques. I loved that innovation, but after 4 years of temporary contracts it came to an end for me.

In the subsequent three and a half years that I’ve worked at Stork, the main topic was research into the effects of heating on meat, water binding etc. In the meantime Wouter de Heij was already angling…

Yes, well, and then TOP, a young company. The job interview with Bert, Wouter and Frank took place on the terrace of Café The Time in Wageningen. The deal was quickly closed. I live in Germany and even though working in Wageningen meant a longer commute, I longed for new subjects with more innovation. I like to look five years ahead while designing machines!

One of my first projects was AMAP, now owned by PerfoTec. A large and broad project: machine design, barrel volumes, components, pumps, water bath, and sensors: I was involved in everything. I also helped develop the software, the user interface.
It was a nice project for which effectively I was the only support staff. Everything landed on my desk and I made many client visits, in UK, France, Spain, Germany, Australia, India and USA. In the USA they’ve had a break in, at which the machine was destroyed. The Touch panel was gone, all the cables cut. I restored the cabling and replaced the missing components. Because the scope of the problem was usually not 100 % clear beforehand, such a visit often demanded some creativity to get to the solution. Yes, I was rather attached to AMAP.

At the moment I’m able to work on one of my greatest passions: beer! Artisanal beer is emerging, there are 500 breweries in The Netherlands, often with custom made machinery. They face many problems, both in start-up and upscaling.

Fortunately there is enthusiasm to find solutions. Again it is a broad project. Mechanical Engineers and Food Technologists of the Process Design and Food Design team are involved in the hygienic design and the recipe improvement.

No problem in getting Maurice to talk about his favorite topic. Yes, there is much more to be told about this beer project, and about what TOP can do for the brewers. To be continued… Cheers!