Between cultured meat and Betamax

If you have a great idea there is a large possibility that at that exact moment at least one other person in the world comes up with the exact same idea. The reality of innovation is that many processes of discovery and development take place in a similar cadence and context. The global state of knowledge and the technique determine the basis, and the precursors of an invention determine the probable sequence of extrapolation.

Disruptive innovation and successful implementation of Blue Ocean Strategy is much rarer. Products and services that change the world appear much more often and much quicker that let’s say a century ago, but they are still exceptions in a jungle of line extensions and half-hearted trials, at its best resulting in a new presentation. In short: “Now even better!”

In the land of technology most effort is put in development and renewal, also because repeated purchases and brand loyalty are determined by something that will have to replace the current product with a considerable longevity. There, innovation justifies existence. And here also format wars surface; an example of a similar idea, but sometimes just a bit different, that arises simultaneous and locks horns with “her schizophrenic self”.  In general after a knock-out race only two remain, polarizing and competing until only one remains to dominate the market. Who remembers the fight between Betamax and VHC video systems, in which the inferior VHS “won”? More recently there was a modern variety of that battle with key players HD-DVD and Blu Ray. In the field of television, after the picture tube we had to choose between Plasma and LCD screens, and nowadays it is between OLED and QLED, not to mention HDR-10 versus Dolby Vision color and contract standards.

For food it goes a bit slower. Of course there are plenty of repeated purchases, but the developments are ongoing. There is attention for health, less sugar, less salt, more convenience and more safety. But the real innovation is not found in tweaking, nor in optimizing. The disruptive innovation, so desperately needed with regards to the current population growth and restricted available sources, is found in the solution of the meat and protein problem. We eat the animals that eat plants and take up space where plants could grow. The livestock sector is not sustainable, that much we know, but we do want to eat meat, or something that resembles meat as protein source. And so we may end up in the first format war in food land: cultured meat versus plant meat. Who will win? Who will be the key players? What are the advantages and disadvantages? 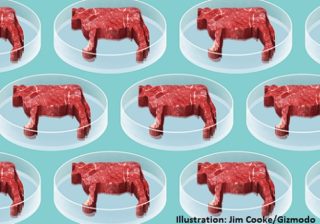 TOP will continue to study this matter the next few years, to look for the opportunities and threats. Maybe cultured meat will be rejected be many due to ethical objections, or due to the high cost, or the unappetizing stigmatizing name. Yet it is too early to choose and maybe choosing won’t be necessary. Especially in food land it is possible to combine synergistic innovations. Assimilation instead of elimination. How would you feel about taste and color through cultured meat, with a nice bite through structured plant protein? Will real meat be still important for the masses? How do we proceed with edible insects? TOP will find it out, but one thing is certain: good marketing will be important to convince the consumer to accept new things. The makers of VHS know all about that.