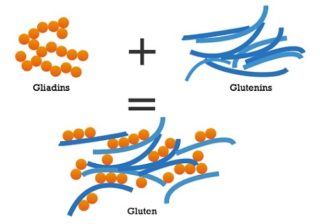 Gluten again? For sure! But this time no plea about the health effects of this allergen on people with gluten sensitivity or coeliac disease (gluten allergy) or about other considerations to ban these proteins from our diet, but about the technical functionality of this ingredient.

Despite the undeniable trend of more and more gluten free products, it is almost impossible to find a meat substitute which does not contain this wheat protein. This is remarkable, since next to a gluten free diet also diminishing meat consumption is an important trend at the moment. In some varieties like seitan the gluten determine the complete structure of the product, in others it is next to soy (also an allergen) the second most common protein and in some meat substitutes herb mixes containing gluten are used. Sometimes the packaging mentions gluten as wheat protein, but of course we won’t be fooled by that!

During my first few months at TOP bv I discovered why gluten are still often being used in conventional meat substitutes. It is an ingredient with an excellent functionality which gives meat substitutes exactly the elasticity and bite it needs to become tasty and meaty. Developing new products without gluten as well as trying to reduce the gluten content in existing products is an enormous challenge. Even products like cookies and bread need to be reinvented when there’s a call for a gluten free variant. Sometimes this requires years of product development and even then the result isn’t always comparable to the original.

To understand these unique properties, we’ll take a close look at gluten once more. Traditionally these wheat proteins were separated into two groups based on their solubility: glutenins and gliadins. Nowadays science makes a distinction of three groups: a fraction containing protein-aggregates with a high molecular weight (the HMW fraction), and two fractions with smaller proteins of which one is rich and the other low in sulfur atoms. The long protein aggregates provide some toughness and elasticity, whereas the smaller proteins act as plasticizers providing tenderness and with sulfur compounds creates little bridges between the elongated aggregates. This way the three fractions together provide elasticity, firmness, toughness and tenderness in bread as well as meat substitutes. This also makes clear why it is so difficult to make existing products gluten free, because there are no other plants found yet with comparable proteins that show this interaction.

If there are no suitable ingredients available, one has to use other technologies to make a good product. A good example is the meat substitute “Beeter” by Ojah bv, made possible by TOP’s innovations in the technology instead of the recipe. In a lot of cases the combination of ingredient selection and technology is the best solution to make gluten free meat substitutes or other products.

In case you are facing such a challenge, TOP bv can help you in product and process development.