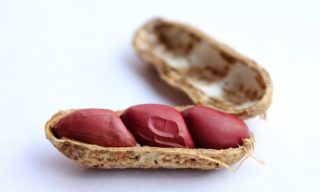 On February 20th it was breaking news in the USA: “Peanut allergy ‘cure’ shows promise in clinical trials”. Aimmune Therapeutics, a biotechnology company in California, has developed a pill that, when taken daily, builds up a tolerance against peanut protein in peanut allergy sufferers.

After milk and egg, peanut is the most common food allergy in the Western world. 1 to 4 percent of the Dutch population is estimated to suffer an allergic reaction when they come in contact with peanuts. Not all allergic reactions are life threatening, but sometimes tiny quantities of peanut protein – like the residue on someone’s hands – can be enough to cause an anaphylactic shock.

In the DBPCFC study (double blind, placebo-controlled, food challenge) of Aimmune Therapeutics participated 500 children (aged 4-17) with a high sensitivity for peanuts; after consuming 1/10 peanut (≤ 100 mg peanut protein) they showed an allergic reaction. The 250 children in the test group each day received a capsule with peanut flour, in which the concentration of peanut protein was slowly built up during half a year. The second half year they received a daily capsule with the highest concentration of protein. After one year 67% of the children who were issued the real pill only developed an allergic reaction after consuming 660 mg of peanut protein (approximately two peanuts). 4% of the placebo group now also reached this tolerance. This is more than 6 times higher than the amount that caused an allergic reaction a year earlier.

The results of this study seem promising. In the most ideal case two-thirds of the peanut allergy sufferers would never have to get an allergic reaction to accidental exposure to peanuts anymore. This pill isn’t for everyone though: 12% of the children quit the study prematurely due to side effects of the pill (abdominal cramping).

The study hasn’t been reviewed by independent experts yet, but the results will be presented at the American Academy of Allergy, Asthma & Immunology meeting, March 2nd – 5th. The study has been performed in the third phase of clinical trials. Aimmune Therapeutics is planning to seek approval of the U.S. Food and Drug Administration later this year, in order to launch the pill onto the market. Early next year they also want to move on to Europe.

It could be that the inconvenience for two-thirds of the peanut allergy sufferers will be reduced by next year. But will they have to swallow a daily pill for the rest of their lives? And what happens if you stop taking it; does the tolerance decrease again? I think I’ll just wait for the scientific publication before jumping for joy.