The recipe for successful blockchains in the food industry

Ever heard about the blockchain? If you haven’t yet: now is the time to read up on it, because more and more people in the food industry are getting really excited about the potential benefits of this new technology. The excitement over blockchains initially started brewing in the Financial Technology (FinTech) industry. This makes sense, since the first ever blockchain can be regarded as the biggest innovation in FinTech in decades (more about that later). Soon after FinTech however, the blockchain-bug spread from Wall Street to many other industries. Today, it seems like every self-respecting industry is researching the potential use cases of blockchains. In the food industry, companies like IBM and Walmart are taking the lead.

But wait – what exactly is a blockchain?
In its most basic form, a blockchain is a ledger. Instead of being held and monitored by one central organization (e.g. a bank) however, the blockchain is run decentrally on many different nodes (computers). Transactions are grouped in time-stamped blocks, which are chained together. The many different nodes battle to add the newest block to the chain by solving cryptographic calculations, hereby securing the network. The true added value of blockchains lays in the possibility to make safe peer-to-peer transactions without the need for a trusted middleman.

Blockchains in the food industry
In the food industry, this unique feature of blockchains can for example be utilized in supply chain management. Having a transparent supply chain is crucial to be able to guarantee food safety and authenticity. Full transparency is difficult to achieve however and practicalities make it impossible to keep one shared central ledger in which all stakeholders are represented. The resulting blind spots give potential fraudsters the opportunity to mess with our food – a difficult problem to solve. Now let’s add the blockchain to the equation. In a blockchain, all transactions between two parties are visible for all the stakeholders. Unlike with traditional ledgers, entries to the blockchain ledger cannot be changed once submitted. This makes it impossible to corrupt data within the supply chain and thereby makes committing fraud a lot harder.

A critical look
The potential benefits have many people very enthusiastic about the use of blockchains in the food industry. Personally, I’m a little more conservative. When assessing the potential of these food-blockchains, comparing them with the blockchain that has the most use cases and value of them all is helpful. So finally, it’s time to introduce Bitcoin (if only because an article about blockchains is just not complete without a reference to the aforementioned biggest innovation in the FinTech industry). The Bitcoin blockchain is currently securing a value of about 40 billion euros (as of: 27-06-2017). What makes Bitcoin so powerful is the fact that it’s open, borderless, decentralized and permissionless. The Bitcoin blockchain is secured by and runs on >7500 nodes, distributed all over the world. This true decentralization makes Bitcoin inherently immutable and guards it against brute-force attacks, double spending, DDoS attacks and more. Additionally, everybody can join and improve the network without needing permission from anyone.

The contrast with a lot of the food-blockchains that are sprouting is large. Many of the corporate projects aiming to utilize the unique value of Bitcoin have the tendency to paradoxically design their blockchains to be closed, local, insecure and permissioned. This might result in blockchains that run on only a dozen nodes – not very decentralized. And if these nodes are run by the stakeholders themselves, it becomes even more likely that the integrity of these blockchains will be impaired. Immutability against attacks will have to come from traditional security measures instead of the inherent security that Bitcoin’s decentralized blockchain offers. Finally, a closed and guarded blockchain won’t ever evolve like an open source chain like Bitcoin’s. By removing most of Bitcoin’s characteristic features, we might be facing a situation in which corporations are changing a revolutionary technology into a cumbersome and inefficient centralized ledger. In the end, they may dismiss the blockchain as a useless technology, thereby missing out on some very useful applications. 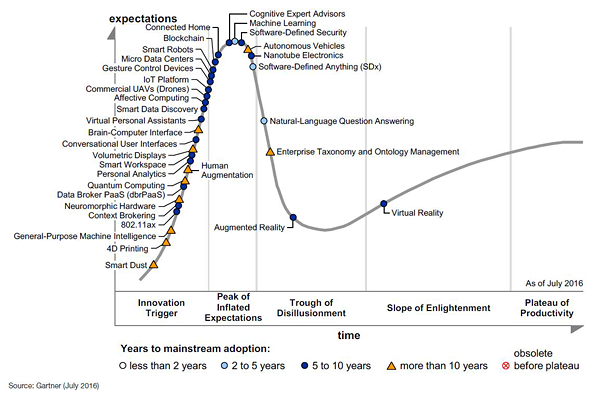 The fate of food-blockchains
So where is this headed? Every year, IT and technology advisory firm Gartner publishes their famous ‘’Hype Cycle for Emerging Technologies’’ overview. In 2016, the blockchain arrived at the so called Peak of Inflated Expectations. In the coming years, we’ll find out if it was all hype, or if the blockchain will actually be able to solve some of the supply chain challenges that we’re facing. I think there’s a good chance the latter will be true, as long as we keep an eye on the real added value that truly decentralized blockchains can offer.